When I was a child, I was told the stories about my grandparents and friends of my parents who had travelled to faraway places. My grandfather, being a biology teacher, went to admire wildlife and of orchids in Kenya, Sri Lanka and the Galapagos.

The house of my parents’ friends, where I spent a number of Wednesday afternoons after school, was filled with mysterious looking statues and the colourful and fine textiles they had collected during their travels to the Far East. The lady would let me glance through numerous Chinese style diaries, filled with jauntily fountain pen-written texts, interspersed with small sketches of daily scenes, such as people on bicycles, fishermen in their boats and different types of houses in villages.

Their adventures made me dream of a world far away from Amsterdam. I was wondering what it would look like, how it would smell, sound and how the people would be. I didn’t know what to expect, which made me curious to discover. Their trips and stories sounded like magical adventures, and appealed to my imagination

Their love and interest for different cultures and nature was infectious. They made it sound very special and exotic to go to new places and enjoy all that is different from the ordinary. They made me want to explore the world like them, and gave me the appetite to taste the romance of travel.

Since I was nineteen I have followed their path. I still remember my excitement of traveling to Bangui, the capital of the Central African Republic, and that first night, sitting in front of my tent with my travel companions who had already been on the road for about four months. I listened to their stories of West Africa, feeling the day slow cooling down, hearing new sounds, enjoying the darkness (due to the lack of electricity) setting in, admiring the smell of the fires and smokey oil lamps, and being afraid of snakes while going to the toilet. It was the magic I had been looking for. All new, all so different.

The whole trip, through, by then still called Zaire, Burundi, Tanzania and Kenya, was an enormous gift. The release of the years a cherished dream. An experience to never forget, even though I missed several highlights due to malaria and delays in train schedules. But as everything was a new experience, even the most everyday activities, such as drinking tea in a small stall on the road, or eating worms and crocodile, were an adventure too. 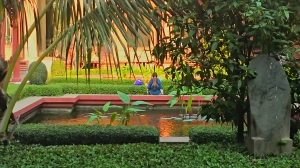 And now, almost thirty years later, I am still a passionate about travelling. And even though I have seen quite a number of places, I still feel the same excitement when going to a place I have never been before. Wondering how it will be, how it will smell and sound. Even so, I come to realise more and more, that due to globalisation and a general increased welfare for at least the middle class, the differences between large cities, especially those countries that neighbour each other, is rapidly decreasing and that the streetscapes and skylines become more and more interchangeable.

Phnom Penh was for a long time known as one of the undiscovered gems of the region. And it has definitely a lot to offer. While wandering through the city you can admire the traces of the past, such as the glimmering spires of the royal palace, the oasis of quietness in the garden of the national museum, and see fishermen throwing out their nets while strolling along the banks of the Tonle Sap River. Or recognise the historical division of the city into different districts (Cambodian, Vietnamese, French and Chinese), encounter numerous attractive places to enjoy local food, and come across huge squares where groups of monks enjoy their afternoon, surfing the net and taking pictures of each other and people sit to feed the pigeons or let their kids play, enjoying a moment of quietness in an otherwise buzzing city.

However, you can’t avoid the many hopeful and negative signs of modernisation, such as the ongoing construction to improve or replace rundown buildings, increased access to motorised transportation, leading to innumerable motorbikes whizzing through the streets without a thought for pedestrians, noise and air pollution, the rotting piles of rubbish, the numerous wandering remnants of plastic, remains of the many take aways, the tangles of electric cables, all this among the signs of booming commerce and extreme poverty. And of course the increase of bars, restaurants, spas and clubs, mainly aimed at rich Cambodians and, of course, tourists, from the West and surrounding countries.

All this does not only make me wander about the future of large and growing cities such as Phnom Penh. Questions that constantly cross my mind include: How will they look like in thirty years time? When will decent basic services be available for all? Are the new sustainable development goals achievable by 2030? Are there limits to growth, or will cities continue to expand?

But also, at what moment, will even larger groups of tourists decide to go off the beaten track, to avoid the larger overcrowded cities, and visit the smaller places instead? Places where they can still find quietness and the authentic way of living, things that so many, at least western tourists like me, who are still longing to the past, are looking for? With all the consequences that entails.

As I write this, we’re staying in a quiet apartment 5km outside the northern Cambodian city of Siem Reap. It still has a village feel here, but the owner tells us that this really was a village just five years ago, and that next year they will lay a tar road that will lead straight to the centre of town. This place will become just another part of the big city. Great for business, our host tells us, but at the cost of tranquility.

Is that really a price worth paying? And, if not, what can we do to stop it? Stop travelling? And give up my dreams? Or is that going to be too difficult and really too high a price to pay?