The first time I heard the term snowbirds was in a Louis Theroux documentary. Snowbirds are pensioners who migrate south in the winter from the colder climates of the northern states of America and Canada to warmer places such as Florida, California, Arizona and Texas. 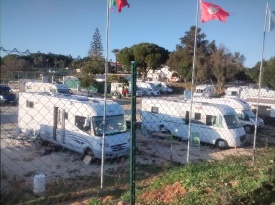 It was some years ago I saw the documentary, and I remember being amazed and impressed, like Louis Theroux was, by some of the RVs they – often couples – were traveling in. Some of them – the RVs, not the couples – were so big, extended by trailers, that these migrants seemed to have a larger area to live in than some of my friends in Amsterdam who, in these colder months when the snowbirds escape, are often confined to the warmth inside.

While watching the documentary, I thought it was interesting to see how the pensioners flocked together and formed their own temporary white roofed cities to meet up with their second bunch of friends, their snowbird friends. And to hear them talk about the meetings and gatherings they organise, to socialise and pursue their hobbies. In the meantime, the other friends and family who stay at home have to look after their houses and belongings, making sure it all looks like as it’s being used and occupied.

And somehow I never realised, till now, while travelling through southern Portugal and Spain in winter time, that we have our own, ever-growing community of snowbirds in

Europe, forming temporary communities on campsites or on ugly parking lots. Or you find them on the outskirts of small towns and villages, or in much smaller numbers, parking on prime spots in front of beach houses which must’ve cost their owners – who weren’t necessary looking to wake every morning to waves of grey hair – a fortune.

I was aware that a large number of pensioners were hibernating here, in southern Europe, to enjoy better weather, the friendliness of the people and a cheaper lifestyle (and rightly so, life is very comfortable here).

But I was always under the impression that most stayed in apartments or holiday houses and that we would only meet a few in campervans or caravans on a campsite, or in the ‘wild’.

But judging by the number of campervans we saw in the Algarve alone, and compared to the many empty or unfinished buildings, the number of campervans moving around in Europe is still on the rise. Articles in newspapers here state that there are, at any one time, at least 40,000 motorhomes in the Algarve alone (yes the whole year round, compared to a population of about 450,000).

It is really something, to see and experience, all these quiet campsites f

ull of motorhomes, with people from all over Europe, and hardly any youngsters or young parents and kids who fill these places normally in the summertime. And they’re providing such a boost to the local economy that the authorities now tolerate ‘responsible’ wild camping.

For a while, it’s interesting to notice how, especially the French and English, will first address you in their own language when sharing an experience or explaining something to you. And then to see the fear on their faces when you speak to them in a language they don’t understand (like Dutch).

It’s entertaining to watch how they communicate when they each speak a different language. And, in the beginning, it’s funny to read the various invitations in the different languages for activities they’ve organised: card (klaverjassen) and ball (I guess they meant bingo) nights for the Dutch, petanque for the French, quiz and chips night for the Brits and language lessons, dancin

g and meditation for all.

It’s quite endearing to do your hand wash or the dishes in the common areas, overhearing or participating in the ongoing conversations, exchanging places to visit, describing walking or cycling paths or listening to the local gossip.

And it is remarkable to note how so many older couples don’t mind gathering together on such a small space, one campervan parked after another, like sardines in tin, and stay there for days, months, in this same place, next to each other, while they might have much more privacy at home. Even on ugly parking lots, some of them full of muddy puddles, and with hardly any facilities, people like to gather together and stay there for longer periods of time. Meanwhile, on the smaller campsites, in a nice, rural setting, just three kilometers away from the shops and restaurants, you hardly find anyone.

And even though at the start of our journey, I have watched it all open-eyed, and thought that it would be interesting to learn more about it all, I have to admit that after a while the dynamics tired me. And not because it all went too fast, or because there was too much noise late at night.

Not at all: the pensioners are your dream neighbours for the hours we work. Most have, like all of us, their daily routines, but do it all quietly. They prepare their meals, go for shopping, they walk their dog, sit in the sun and read, go for a walk, a bicycle ride or join one of the many social events on the campsite. They share stories, they learn from each other, they interact and in tranquility they enjoy their retired life, a life they have worked hard for.

So, that is not the problem. It’s more that I get restless. Staying on these campsites gives me feeling of

being caught up in a small sleepy town, packed together on a small surface. A place where you hardly seem to have any privacy or space to escape social control and where life meanders along without much happening.

And, yes, I realise, we are migrants too, hibernating here like them, and we might not be the most dynamic neighbours either as we spend most of our days working while they doze in the sun. But still, I don’t think I am ready to join the snowbird life. And I wonder if I ever will, whatever age I am.

Somehow I rather see myself more as a middle-aged backpacker in a VW van – which is bad enough.