Three reasons to love the city I hate 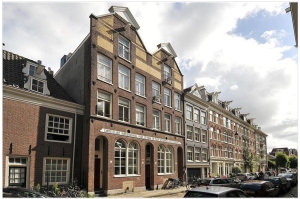 One of the main reasons for us to start this whole travelling thing and working worldwide was to get out of Amsterdam. At least, it was for me.

We lived for seven years in a great house in the centre, and all those amazing things were just a projectile vomit away. I often used to remind myself how lucky I was that I could take my dog for a piss every day in places other people had saved up to come and take a picture of.

That’s a luxury, I know. But it can also get annoying when your dog can’t take a piss without someone taking his picture.

There was an article in the Dutch newspaper, De Volkskrant, this week talking about how busy Amsterdam is these days. It’s so busy, it said, that even the tourists are starting to complain.

And yet, Leonie and I still come back to Amsterdam between our trips abroad. And this time, for the second time in just a few months, I’m here on my own while Leonie is working elsewhere in the world. 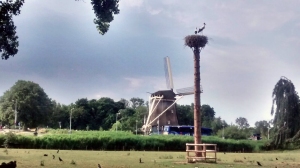 Why do I come back to a city I tried so hard to get away from?

Because there are some still things about this place that I really enjoy. Seeing family and friends, is one, of course. And here are a few more that might not be so obvious:

This is one of Amsterdam’s forgotten parks, even for Amsterdammers. While the Vondelpark is packed on a sunny day, there’s always a quiet spot in Amstel Park.

Like the Vondelpark, and any other Dutch park, it’s got nice spots to sit, places to get a coffee or a beer and a pancake, beautiful greenery and quite a bit of art. But Amstel Park has more than that. It’s got wallabies. Albino wallabies at that. And it’s got a train. Not just some choo-choo thing either, but one done up like a high speed intercity. Cool. 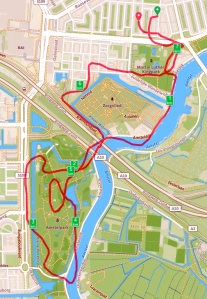 My route along the Amstel River and around Amstel Park.

When we’re in Amsterdam these days, we stay quite close to the park, which is pretty much on the outskirts of the city. I run there a couple of times a week, especially these days when the weather is OK. I go fairly early in the morning, and it is such a great place to run. It’s quiet, no weaving in and out between people. And I always see rabbits. Always. Black ones and brown ones. I’d show you a picture, but I prefer to let them piss in peace. Same with the wallabies.

Another good thing about Amstel Park is that I have to run along the Amstel River to get there, and if I turn my music up loud enough I don’t hear the rumbling motorway, and the city and all its commotion seems very far away.

As an international city, and since Dutch people tend to read a lot, Amsterdam is a great place for authors to promote their new books.

And next week, I’ve got tickets to see one of my favourite authors, TC Boyle.

A lot of comedians come here too, mostly on their way to or from the Edinburgh Fringe, but the venue, in a place called Toomler is so bad (expensive and shockingly poor service) that it’s almost not worth going.

So, that’s one more thing I like about Amsterdam, it’s abundance of non-Dutch culture.

There’s a joke people tell about my hometown: the best thing about Paisley is the bus to Glasgow. That’s really not true, because the bus takes ages, and the train can get you there within 15 minutes.

But that’s not what I mean about Schiphol here. Not entirely.

What’s really great about Schiphol is that it’s a huge hub airport. If we’re not travelling to see friends, they can easily come here, even if it’s only for a beer at the airport while they wait for their connecting flight.

If they do stay over then we can have great fun here visiting all those pubs, restaurants, shops, coffee shops, red light district, museums, and whatever else the city has to offer.

So, on occasion, when it suits me, I can enjoy all those things too. And it is nice to have so much so nearby.

Maybe, wherever I go, and even in Amsterdam, I prefer to be a tourist, to explore a place, sample a bit of everything. Then, when I feel I know it, I get itchy again. I want to learn about other places and how other people live and what they like or dislike.

And Amsterdam is really not such a bad place to come back to in between.

What am I missing? What are your favourite places in Amsterdam?

« Every disadvantage has an advantage
Back to my roots »