Home › Worldwide working › Back to my roots

Back to my roots

Years ago I studied irrigation at the University of Wageningen. Already in the first year it became clear that irrigation is not simply about managing land and water, but that it involved much more. There is the agricultural and land tenure aspects to consider, the institutional, political and legal issues to deal with, the economic side of it all, the environmental impact and of course the people, their tradition and culture, and their similarities and differences to take into account.

Even though my intention to work in irrigation sector, at the start of my career I ended up working in the drinking water and sanitation sectors. And have done for many years. Like irrigation, and many other areas, drinking water and sanitation is also a multi-faceted area. Very interesting, with always something new to learn, especially when working in multi-disciplinary teams. But somehow I always regretted not to have worked at least once in the irrigation sector.

Military protection during the field visits

So when I was contacted to join a team to work in irrigation in Niger, I didn’t have to think twice. It is true that in Niger security is an issue and that many embassies advise against travelling there. However, I had been to Niger before, and had good memories of working with the team from Plan International. And I don’t regret my decision.

Unfortunately I could join the team only the last week of the mission. A shame because I missed the part I love most: field trips to the different sites (this time, complete with military protection).

What I enjoy
Travelling and working together, meeting potential beneficiaries, getting to know the institutions and people involved in implementation and getting a feel of the potential sites. Discussing the opportunities, possible constraints, anticipated benefits and changes which a new or improved irrigation scheme might bring to the community.

Instead, I had meetings with a large number of professionals working on different projects and based in the capital, Niamey. People who, from their experience, could tell me about the realities in the field. During the various discussions the complexity of the matter unfolded and I saw again how intricate this work can be.

My role is to ensure that the programme will adopt a social and gender perspective. For this, it is important to understand the needs and interests of the end-users – women, men, young and old – to assess potential benefits of the proposed interventions, to assess the risks and to be able to propose additional measures to ensure that the new or rehabilitated schemes will have a positive impact in reducing the existing gender and poverty disparity.

In the existing studies, all carried out in the previous century, there is no information about these issues. Households are considered as single entities in which everyone has the same interest.

And, like here in Europe, that is a too simplistic view of reality. Women and men have each their own responsibilities in the household and most likely different access to land. For example, where men might own land, women might only have access to cultivate land in a particular season. They have their own activities to earn money, where men might be involved in rice cultivation, women might cultivate vegetable crops and only be involved in processing the rice.

And because of all these differences between men and women, young and old, and also between different socio-economic groups, the construction of a new irrigation scheme, and even the rehabilitation of an existing scheme, will have a different impact on each. Like in the old days, when the construction of polders had a different effect on those who were earning money from fishing, or those who were farmers looking for more and better land.

A fair deal
In the case of Niger, land will pass from private owned land to state owned lands. Landowners who lose their previously owned plot will be compensated with a new, but smaller plot in the new the irrigation scheme. So potentially, there is room to allocate plots to those who previously did not own land, for example youth, women or the heads of families who had no land. 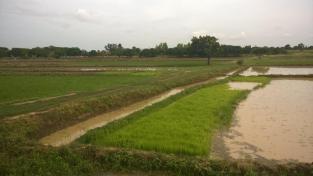 But will they be offered the opportunity? And are they interested, willing and/or able to take the responsibility and successfully cultivate in an irrigation scheme? And can they participate in the management of the scheme, negotiate suitable times to irrigate? And what if the harvest falls short? Do they have the financial backup to compensate for a bad year and pay all the costs involved (pumping cost, seeds, fertiliser)?

So even though as a team we have made a good start, there are still a large number of issues to be addressed and a long and interesting way to go before we can write a final report with our recommendations. And I hope I will be able to make a meaningful contribution, both to increase agricultural production, an important national goal, and contribute to reducing the social and gender inequality, at least on the sites where the programme will be implemented.

And I hope this will be continued…

Thanks to my colleagues for the photos