Waiting for the inevitable

I’ve never had many illnesses in my life – which only confirms I must be due for something soon – and any time I did have something, I don’t remember being very worried about it.

When I took part in trials for the male pill in the mid-90s, I had a general medical. Part of that was a blood test, mainly for organ functions, and, because of the nature of the trial, a semen sample. When the doctor called with the results, I remember (stupidly) thinking, hoping, that if something was wrong that I would rather have a diseased liver than a low sperm count. It was as if I’d prefer a slow painful death over some slight knock to my perceived manliness.

That was probably the last time I worried about results from the doc.

I’ve had this numb felling in my right thigh for a while. More than a year probably, and suffer fairly regularly from the Jimmy legs.

I never bothered about. It didn’t give me any trouble: no pain, no loss of muscle movement. Nothing to worry about.

And then, flying back from Bolivia on the Miami to London flight, that numbness in my leg spread right up my right side. I hadn’t slept well for a while before that after all those long bus trips through Argentina, and I was loaded with some flu or other lurgy and running a bit of a temperature.

I pressed the button and got the flight attendant. She asked all the questions to make sure I wasn’t having a heart attack, and asked if they should put out a call for a doctor on board. I thought about it, and said no. She then let me stretch out on the back row of seats for a sleep, and I woke up feeling much better, still loaded with the flu, but at least the numb patch was only in my leg again.

That lurgi stayed with me for another few weeks while I worked in Scotland, and the leg numbness hung around too. Since it was no longer so serious, I didn’t bother with a doctor. Until…

When I got back to the Netherlands, I heard that a friend had suddenly had a stroke. This was someone who lived a fairly healthy life, although he’d had a period of stress, and wasn’t very much older than me.

I made an appointment, and the doctor sent me to the neurologist. And now I remember that I had been worried about test results before. I’d been to this particular neurologist a couple of years ago with a persistent migraine, and I have to say I was worried about the results of the MRI scan then (it was nothing, and I haven’t had a migraine since).

The neurologist examined me and decided I should go to the hospital for an EMG, where another doctor stuck a needle in my leg and tested the electrical impulses of the main nerves.

This was the test that worried me. And I had to wait for a month, after we’d been to Cabo Verde, to get the results.

The neurologist’s clinic is walking distance away, and all the way there I was telling myself that although the result will be, as always, inconclusive, that I should prepare myself for some bad news. Just in case. Be prepared, I told myself, to find out you have motor neurone disease.

Everything was normal. No life threatening diseases after all. But I still had this numb patch just above my right knee. The doctor had said all along that it was likely to be a trapped nerve. Obviously, I chose to ignore this and invent far more horrific scenarios. She suggested I see someone about my posture, sure that this was a mechanical problem rather than a clinical one.

I made an appointment and went to see a movement/posture therapist. I told her the problem and showed her how I usually sit and sleep, the positions in which I spend most of my day.

It turns out I’ve been sitting not on my arse like you should but on my lower vertebrae and that sleeping on my belly was even worse for my poor back. I don’t have back problems, I told her. She gave me that ‘yet’ look.

I started sitting upright and sleeping on my side, and went back to the therapist after a week.

‘Good,’ I told her and explained that the numb feeling in my leg was already pretty much away. 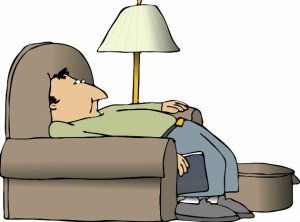 It was that simple. It wasn’t motor neurone disease, it was slouching. And slouching for hours on the plane back from Miami after slouching for hours on buses through Argentina had meant that some nerve somewhere in my spine got a little too much pressure. Worry and telling myself daft stories based on nothing did the rest.

So I’ll see the therapist a few more times for a few more tips, and I’ve been very good about sitting straight and sleeping on my side. So far. But just letting your bum slip down the cushion that little bit more and stretching out your legs is so comfortable, I wonder how long it will last.

Until the numbness comes back, I suppose. In the meantime, I’ll try not to worry too much about the day when the doc does give me the bad news and try not to get carried away with daft stories.

« Back to my roots
Being kept in suspense »