Home › Inspiration › House of Cards 2: another view of the same scene

House of Cards 2: another view of the same scene 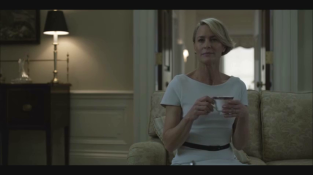 A few days ago I posted a blog in which I applauded Claire Underwood’s qualities in questioning the norm, just by countering that one question. How admirable it was to see her doing it in a calm and cool way.

I realise too that, as much as I am impressed by her reaction, there is also another way to look at the same scene. Claire Underwood is actually hard and defensive in her response, immediately raising barriers between herself and the one she is talking with. She closes the door to an open and honest discussion, which is about appreciating the exchange of deviating views, so important to understanding and accepting our differences.

She does that in response of the Hannah Conway’s efforts to connect with her. A moment when Hannah thought she could share her experiences and doubts, and put herself in a vulnerable position by sharing how she sometimes struggles with the public exposure of her personal life during the ongoing campaign and the responsibilities that come with it. How difficult it is for her that she sometimes has to hide the fact that she doesn’t always fully agree with the political standpoints of the party she and her husband represent. And she even expresses open admiration for all Claire Underwood does and represents and sees her as a role model.

For Claire Underwood, that is the trigger to take some distance and close off. Her character is often uncomfortable when confronted with personal emotions and situations where people show vulnerability, and she chooses to close her heart. It even seems as if Claire Underwood condemns Hannah for being open and soft spoken. For sharing her internal struggle, showing her human side, and for the impertinence to think that Claire might also want to be open and allow a personal question.

So, even though Claire Underwood, with her simple and direct question, manages to challenge the norm, she also succeeds in abruptly ending a potentially interesting conversation. A conversation which might have provided both parties with valuable insights into each other’s point of view and help each other appreciate their differences.

Instead, Claire Underwood chooses to disconnect, to protect herself, and not to redirect herself to someone else’s viewpoint. And even though it seems like a strong and powerful statement to make, it excludes hope for a society in which people with opposing views can live together and are interested in exploring them.