In the first two weeks of July we stayed in Rothesay, a town on the island of Bute. A small island, on the west coast of Scotland, not too far from Glasgow. In the past, it was a well-known holiday destination for Glaswegians. Currently, it’s being advertised as the Scottish Madeira because of its mild climate and palm trees growing along the promenade. 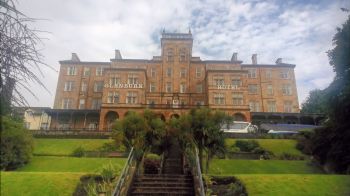 Rothesay is a city that owes its charm, or what is left of it, to buildings built during its more glorious days. With a bit of imagination, and the help of pictures, you can see the people from Glasgow swirl around the town, wandering around the fair in the Winter Garden (a grand cast iron and glass structure, only minutes away from the ferry terminal, now being used as a tourist information centre and cinema) going to concerts and enjoying a cuppa in the café of the art deco Pavillion, now a dilapidated building which seems to be getting refurbished, sending postcards using one of the large number of old red post boxes spread over town, and of course staying in one of the grand hotels looking over the loch.

owadays, Rotheay looks much more desolated. Of course there is the odd day tourist, arriving with the ferry, wandering hopefully through town for some excitement, playing a game of putting despite the rain, or sitting well wrapped up in the open top sight-seeing bus. Then, at the end of the day, they rush back to the ferry, with the obligatory ice cream or fish supper from the famous (in Scotland) Zavaroni chippie.

A couple of times a week it is party time, when a large group of day visitors come from Glasgow on the Waverley (the last sea-going paddle steamer in the world) flood the town. Judging by the sounds outside the pubs and the crowds inside, they are there for the karaoke, and nothing else. Stories go that quite a number don’t make it back on the Waverley and stay overnight with their newly met friends. Not sure if that it is true. But we have seen the crowds, both inside and outside of the pubs enjoying their stay. 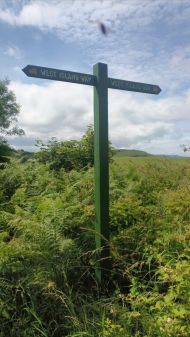 And even though I understand that most will limit their visit to Rothesay and Bute to a day or two, it doesn’t do justice to the other beauties to be discovered. Considering the facilities, especially outdoor activities including golf, horse riding, sailing, long distance walks on the island, it might well be that it is not promoted to the right audience.
Although a visit of almost two weeks was a bit pushing it, there was so much to discover.
Without doubt, for us the main attraction were the opportunities to go for long walks, especially the West Island Way.

A forty miles path crossing the island in a zigzag from the south to the north, going along shores, through farms, forests and moorland.

We were lucky to have two consecutive dry days to be able to walk the path. It was a great way to see all the island had to offer. There were the amazing cliffs at the side of

Kilchattan Bay. The deserted beach in Etterick Bay, probably a great and busy beach on a sunny day (in the past when, according to the information at the visitor’s centre, it used to be very busy, not that it was warmer then, but the people were still strong and not spoiled by Mediterranean sun and temperature) and the peaty and wet moorland fields to cross. And towards the north, a long walk through a planted pine forest followed by a walk along the loch. Besides the numerous cows and sheep we were also treated to some Scottish wildlife, such as famous grouse, deer and seals.

And, of course, there are the pubs, like most other Scottish towns: enough for a proper pub crawl, some with very nice pints, a few decent restaurants and last but not least the small Bute brewery, serving locally brewed beer, pizzas and other delicious dishes and offering the opportunity to sit outside on a sunny day. A small little gem, and a good alternative from the traditional pubs, with friendly and enthusiastic staff.

But the unmistakable highlight was the time we spent together with Jim’s mom and brother who came to visit us for a day and half. Almost as soon as they arrived, Cathy invited us to the pub, to celebrate her holiday with a whisky and lemonade. Sharing with us stories of the past, including memories of her previous visits to Bute as a child, it became an unforgettable night.

So even though Rothesay looks a little run down and the island seems to catch lots of rain, the visit was worthwhile. Would I come back? I don’t think so. However, the visit gave me a taste of what Scottish islands have to offer. And I do see why some people choose to permanently live on one, especially those enjoying outdoor life and activities, and sharing their stories in the local pub. If I could just get used to the amount of rain and the unpredictability of the weather, I might even consider it.