Home › Mind tricks › How I learned to run minfdully

How I learned to run minfdully

When we were in Cochabamba, I finally started to run. A new thing for me. Since very young, I was convinced that I would not be able to master running. When I was about six, I was member of an athletic group. I loved all the jumping, throwing and so on, but dreaded the running part of it. I just couldn’t find a comfortable pace and would be extremely slow, especially on the longer distances. So since then, my mind has since decided that I wouldn’t be able to run. Not sure, but maybe you have similar lifelong convictions with things you are convinced you will never be able to master.

For years, I comfortably cherished this idea. It suited me well. I didn’t have to try, and in places where there was no gym or opportunity to join another sport, I did not bother to exercise. Just went for the occasional hike, to keep myself fit.

But now, getting older, a little wiser and way more appreciative of my health, I feel I cannot go for more than two weeks without exercising. And I don’t think anymore that hiking alone is sufficient. So, when we were in the US, on our way to Bolivia, Jim and I each bought a pair of running shoes. Ready for a new challenge in Cochabamba. Ready to challenge my long time cherished conviction.

And now, three months later, I know I will never be a natural runner. I know friends who, by using the app ‘from couch to 5 k’, have, in three months, overcome their resistance and run 5 kilometres with ease. And some of them are even ready for a new challenge, a half marathon, maybe even a whole marathon. I won’t join them.

However, running has taught me a lot. It has taught me that you can challenge a long held conviction, and prove it wrong. Just by doing it. Practice, discipline and persistence have helped. Because really, there were moments I was tempted to give up, at least skip a day or two. Just planning and thinking about it would have not been enough, I am afraid. But the sacrifice has been worth it. Even though I still struggle (and my mind still tells me that I am no good at running), I now manage (with small breaks in between) to run 3 kilometres. Maybe not much, I know, but enough to keep me fit.

Further, I now better understand how to balance between ‘being in the here and now’, and planning and acting on values and goals. Something I have been struggling with for a while. Because what is the right balance between living in the here and now, while setting yourself challenging goals, of which some, in order to achieve, mainly involves unpleasant experiences. Not that life only has to be pleasant, but I don’t feel like living like a masochist either. 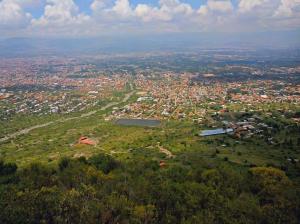 This was the great view while running in Cochabamba. Did I see it? Not for a long time, I only felt pain.

My value is to maintain a healthy body and mind (a health for which I am thankful). My goal was to be able to run three kilometres. Which, I think, is a lot when you know you can’t run, and consider yourself a couch potato, at least when it comes to running. And even more so running mindfully in the here and now and paying attention to all your body sensations, emotions and thoughts. For a long time I was stuck (and frustrated) at half of that distance. Because, in the beginning, all I was aware of was pain, my uncontrollable breathing, the sweat pouring over me and my wish to stop.

It is only the last two-and-a-half weeks that I covered the gap of fifteen hundred meters. For this I used several techniques. The first was running in a different direction. Somehow that gave my mind that much of distraction that I was able to run five hundred meters more.

And then I remembered what I learned in a self-defence course. The advice was to strike through a shelf if you wanted to break it, to focus your stroke to the ground, and not to stop at the shelf. You have to, as it were, think through the shelf. A technique I have since also when training.

Even though I knew I would not be able to run more than 500 meters without stopping, I still started with a higher goal. And little by little this helped me to stretch both the total distance, as well as the distance I could run without slowing down to regulate my breath.

However, for a while, this technique made me focus too much on the goal and less on what happened in my body. While completely focussing on the goal, I would go too fast, stumble over my feet and exhaust my body even faster. But when solely paying attention to my body, the goal would seem unreachable.

And then I remembered the mindfulness instructions during a walking meditation. The instruction invites you to have part of your attention on your bodily sensations, emotions and thoughts (internally focused) and part in the awareness focused on the environment (externally). And that helped.

Through dividing my attention between my goal and my internal sensations and thoughts, I somehow felt synchronicity between the two. The goal and body were not competing anymore. It gave me room, I was not stuck in or annoyed by either my unwilling body or the seemingly unreachable goal. And with a lot less effort, I finally managed to complete the 3 kilometres. And I feel comfortable that with some practice and discipline, I can use these new skills and knowledge to challenge some more long held convictions or take up new challenges.

« Give your mind a name
To plan or not to plan. To promise or not to promise. »