After several months in Europe, we have moved again. This time to Thailand, to Hat Yai, to visit Jim’s friend, Gary. While on his way travelling

the world, Gary settled down here, about seven years ago. Our last visit to Hat Yai was six years ago, so it is great to have the opportunity to meet again. Especially since this time we plan to stay a bit longer.

Since we plan to stay for two and half months, with necessary intervals for visa reasons, it is worthwhile to look around for a place to settle down; a place where we both can work and study comfortably, and continue with some of our daily routines.

Slowly we are getting experienced organising our daily life in a new place. Not everything has to be the same. Sometimes we look for a place where we can cook. Other times we appreciate the luxury of a terrace or garden. What is always important is that it is relatively quiet, that there is good internet access, a table to work at, and that there are some shops within walking distance.

Once a place is found, we slowly find our way around. We explore the places to eat, find shops or stalls to get some fruit, and possibly a nice place for a coffee break during the day. And we slowly settle down and try to find a balance between work and exploring the new environment that suits our rhythms.

Although Gary lives in Hat Yai, we have decided, on his advice, to stay in Songkhla during the week, a small town on a peninsula in the south of Thailand, surrounded by a lake and the sea, about half an hour drive from Hat Yai. And even though it is a not a very well-known tourist destination, it is a perfect spot to stroll along a beautiful strip of white sand, admire skilful kite flying, and savour the tasty local cuisine. And almost as important, a good place to avoid the heavy foreign tourist traffic we experienced when we were waiting for our visa at Bangkok airport.

And now that we’re over our jet lag, settling down and finding our way in both Hat Yai and Songkhla, I notice that it is not as easy to break with some old patterns and pick up some new ones, as I had hoped it would be. Not even in a 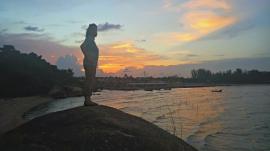 new and different beautiful place, which potentially offers the possibility for a new start and many romantic strolls as sunset. At least not as easy as I had hoped.

Even more confrontational, I also realise it is difficult to maintain some of the good habits. Habits which have taken me quite some time and effort to develop, such as going for a run three times a week and writing a blog once a week (which I also failed to sustain while staying in Amsterdam). These seem to be habits, that with simple and seemingly legitimate excuses, like it is far too hot, or the hindering thought of ‘nobody really misses our blog anyway’, are easy negligible. 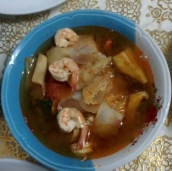 While other habits are much easier to keep or take up again. Which goes, as it were, by itself, such as eating healthy tasty meals (no effort needed, there is plenty choice), connecting with Gary’s girlfriend (through going to a spa for a Thai massage), going for a daily walk, or learning some basic Thai (a very useful skill since few people speak English).

And that makes me realise once again how important it is to regularly reflect on and clarify the things you find really important in life, your values, even in a place as idyllic as Songkhla, and to examine how, on a daily basis, you can act accordingly and become aware of what is holding you back, to act on those things. It’s also important to realise that even though actions might be different, or more difficult to implement, commitment to value based actions, even though they might not seem that attractive, contributes, at least for me, to a more enjoyable and meaningful life.

« A trip through literature
Food matters »